After it was clear in the 1980s that video game home consoles were the wave of the future, everyone wanted their own game. And I do mean everybody. There were video games from all sorts of companies and about products that people would never think of. From 7-Up, to Domino’s Pizza to homemade games featuring characters and stories from the Bible. As the horror sequel boom of the 1980s continued to gain strength at the time that video game consoles did the same, it was inevitable that the two would cross over. Atari already had released games of John Carpenter’s Halloween and The Texas Chainsaw Massacre in the early 80s, so games based on horror films were not unheard of. They would return in 1989’s Friday The 13th for the Nintendo Entertainment System, based on the film series of the same name.

The game would soon become known as one of the most difficult and tedious games to beat in the Nintendo library. Some think it’s the worst game ever released on the system. Most thought it was just…odd. Jason in a pinkish jumpsuit, his mother’s floating head, throwing stones at furry, zombie-like creatures. People didn’t know what to make of it. It certainly wasn’t what people were thinking of when they thought Friday the 13th, the video game. It was hated. But, it developed a cult following.

Flash forward to San Diego Comic-Con 2013. The cult following of game was still strong. So much so that NECA revealed a convention exclusive, retro Jason figure in a video game style box, the first of their highly successful video game appearance line. It easily goes for $100 on secondary markets. Fans have been asking for a re-issue of it since it first sold out. Well, NECA listened and gave us this. 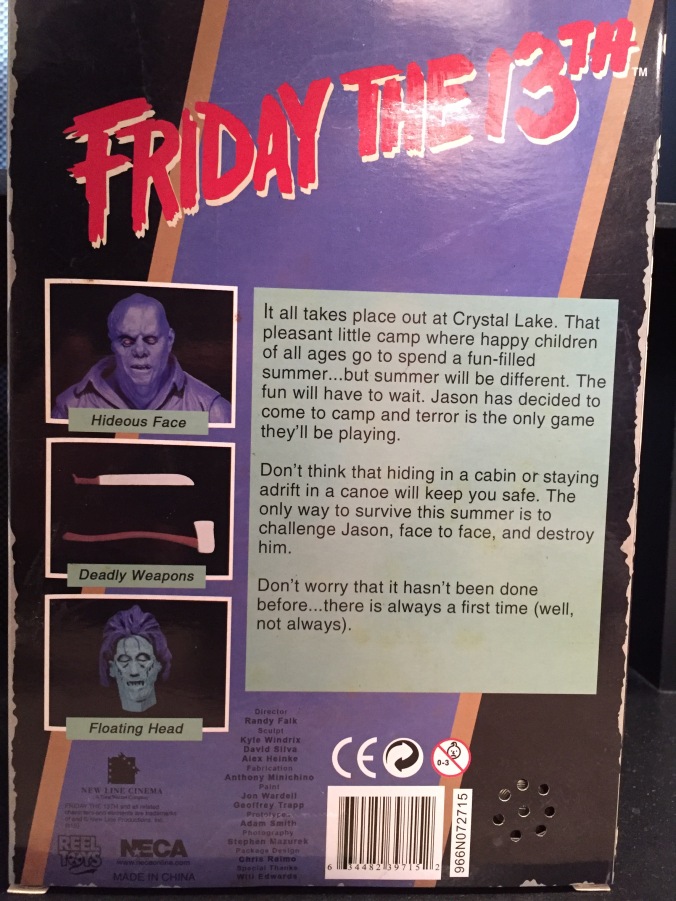 But, it isn’t quite the same figure.

NECA made it just different enough that even collectors who already owned the first VGA Jason preordered this. First and foremost, there’s this:

That is one of the many music pieces from the game that fans remember so well. The device is actually activated by light as opposed to the box flap opening and closing. 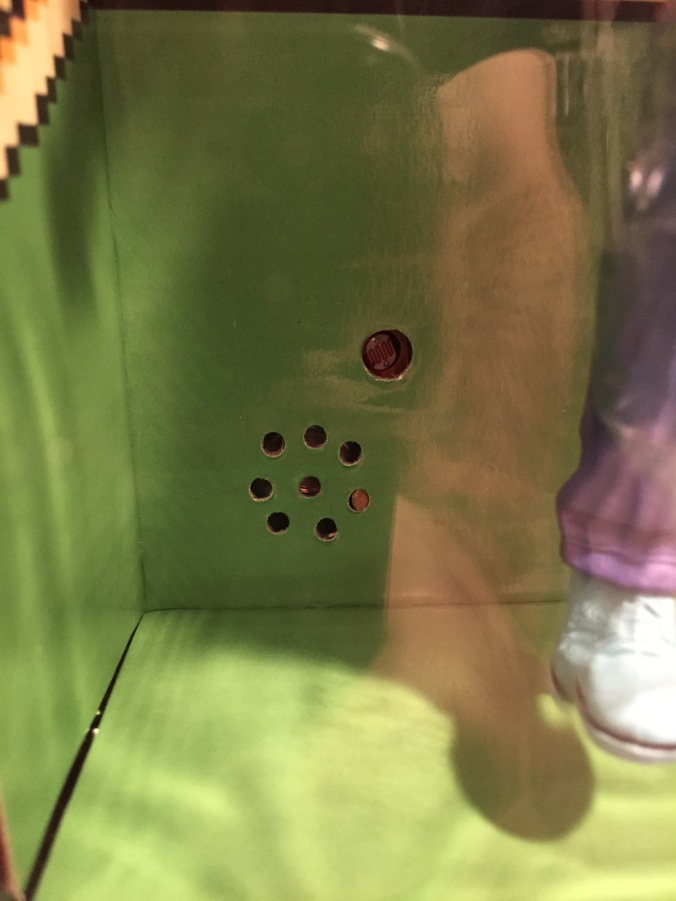 The tiny hole above and to the right of the speaker is the light sensor.

The backdrop captures the inside of the cabins in the game. 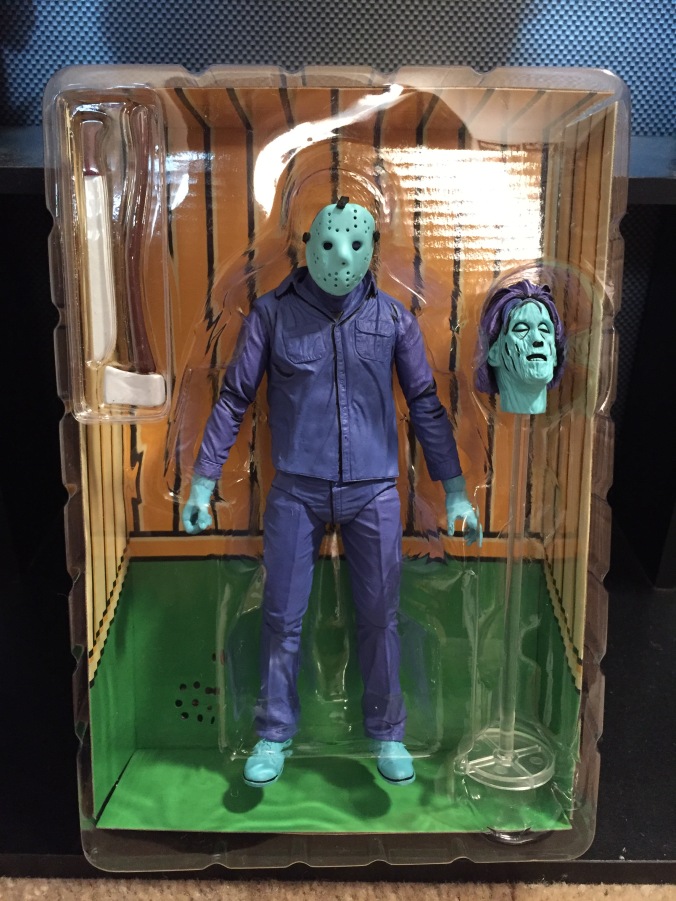 The figure comes with all the accessories that the 2013 Jason did, but NECA included an extra Mrs. Voorhees’s floating head with a clear, flight stand. It was another memorable moment from the game and perfect to be included.

This figure also differs from the original in that it does not glow. The mask, face, hands, feet and weapons all glowed in the dark. So, you get the same figure minus the glow ability, an extra accessory with stand and a music version of the same VGA packaging from 2013. 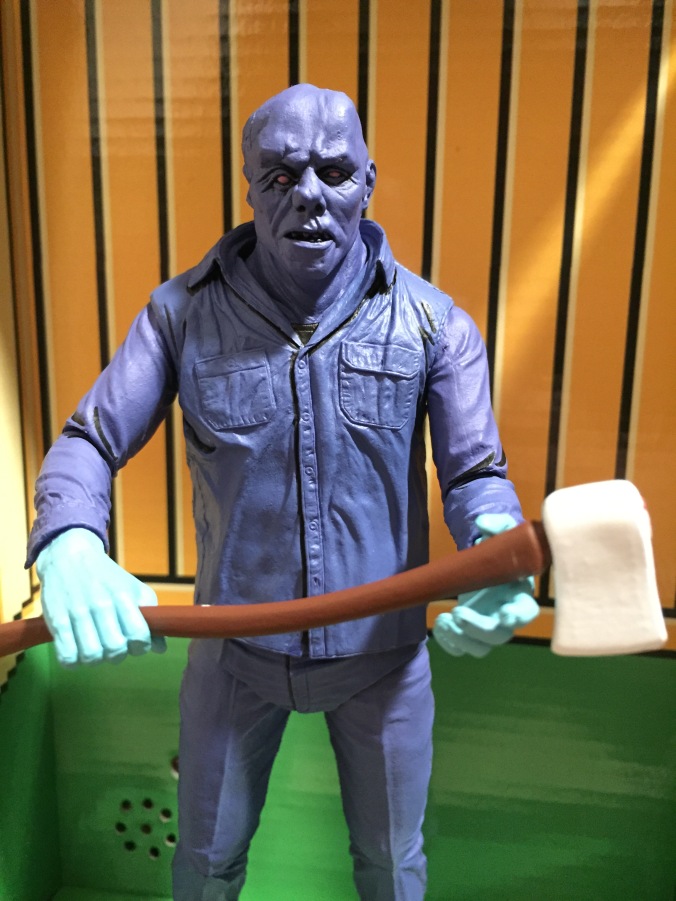 I really like how NECA didn’t just put out the same figure again. The changes are added references towards the game and that is exactly what the point of these retro products are. The music is a grin inducing trip down memory lane. I’m glad I wasn’t able to get the first one. Because, as NECA has shown me themselves with things I cannot yet discuss from my studio tour, patience pays off with this company. This figure retails for around $24.99 and is available online and in stores now.

Check out NECA Toys at http://www.necaonline.com or on Twitter @NECA_TOYS