This past October 8th marked the 25th anniversary of Mortal Kombat being released in arcades.

Wow…Mortal Kombat is a quarter of a century old. That makes me feel incredibly old if I’m perfectly honest. I remember waiting close to half an hour to play it in arcades and having to put your quarter up on the control panel when your turn was approaching.

In perfect timing for the anniversary, this year Storm Collectibles began releasing a series of figures from the game franchise at 1:12 scale, or about inches 6.5 tall! I was immediately extremely interested when I heard about them as Mortal Kombat is by far my favorite fighting series! Well, I finally got a chance to get my hands on one. And it’s my personal favorite MK fighter… 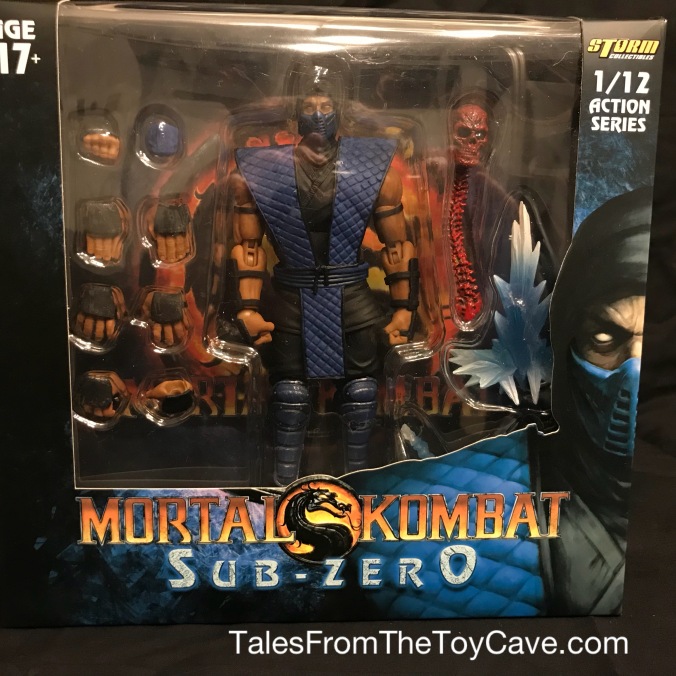 Right off the bat, this figure comes with one particularly cool feature, interchangeable masks from MK 1 and MK 2! In the original Mortal Kombat, the three ninjas in the game all had a basic piece of cloth covering their mouth and nose.

For the sequel, a plastic, vented mask was introduced.

While both look very cool, pardon the pun, I’m personally more of a fan of the MK 1 cloth style mask. These masks are single, pull on and off pieces. 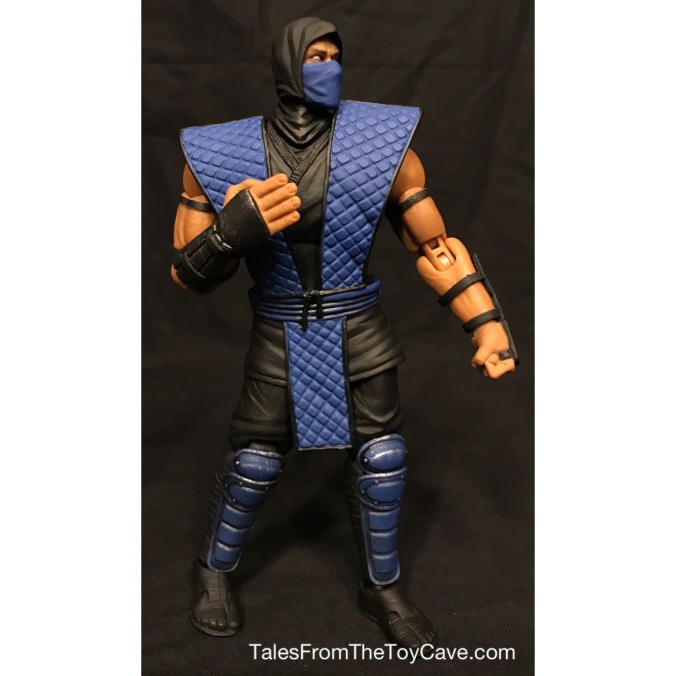 Obviously, the character’s namesake comes from his ice powers that got more varied and tricky as the MK series went on. However, Storm chose the two most iconic moves for the Lin Kuei assassin: his ice blast and sliding kick! 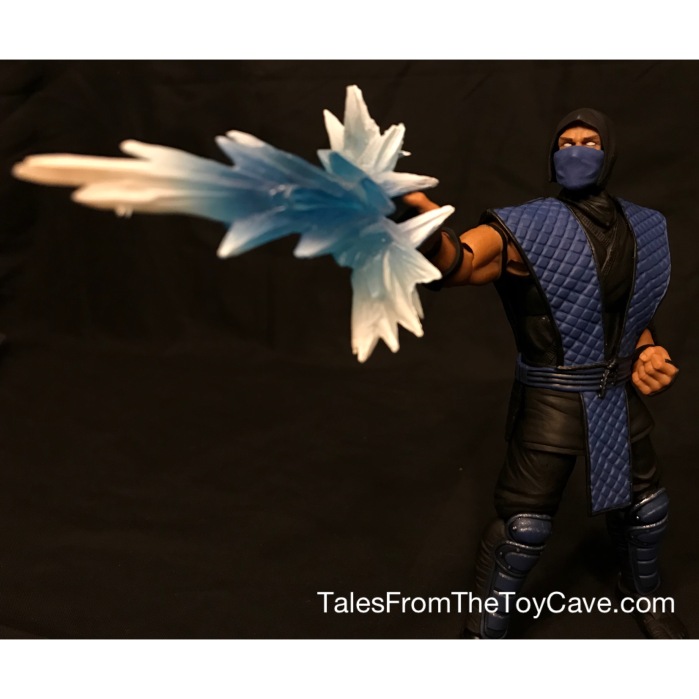 The ice effect fits over the fingertips of Sub-Zero’s flat hand.

Once on, the arm can be posed to aim the effect however you like!

You can even recreate the charging up pose Sub-Zero makes just a moment before unleashing his ice blast!

The second move is the slide kick. Originally, this move was not accompanied by an ice effect, but it was added in later entries in the series. 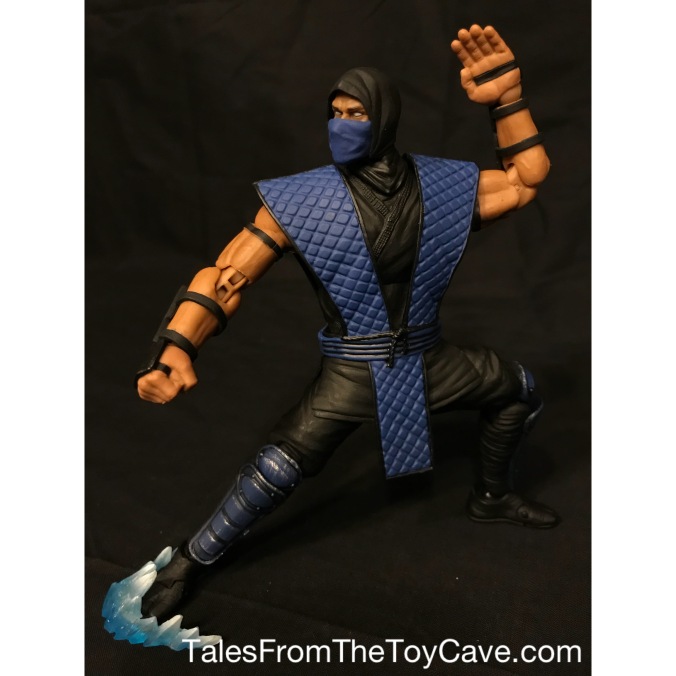 Like the ice blast, the sliding ice effect can be used with each respective limb. The effect simply lines up against the foot, however, it does not connect to the foot as the ice blast does to the hand.

A special hand is included to grasp the spine and have it raised over Sub-Zero’s head in his victory pose! 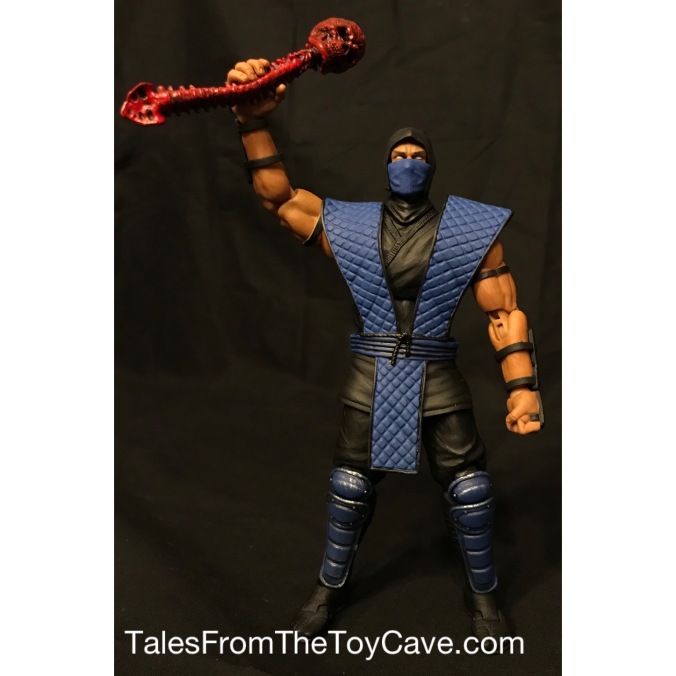 One of the things that really makes this figure a lot of fun is it’s high flexibility. A huge variety of poses, both static and fighting moves, are able to be recreated. 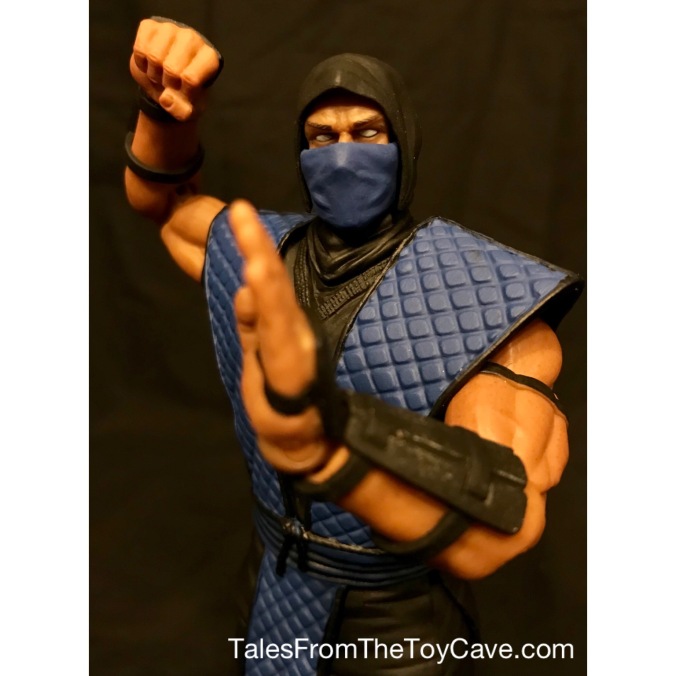 A meditation pose is also possible. 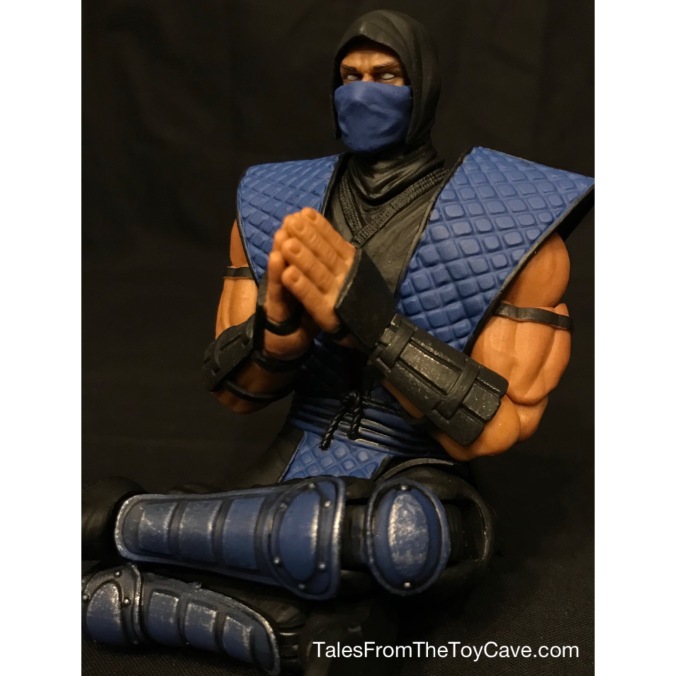 And even the huge, gravity defying uppercut each character could do!

I absolute love this figure! There have been a lot of attempts from various companies over the years to make action figures from MK and each time, something was off. But, Storm Collectibles nailed it in my opinion! A variety of accessories for the special moves, a wide range of poses and even a gory accessory to recall the brutality that shot the series to fame!

Now, this figure is $50 which may seem a little high for a figure of this size. However, the quality is absolutely there, in my opinion, and worth the cost. The shoulder wraps of his outfit are separate, soft plastic pieces as opposed to having the entire chest being one piece, for example. These little details make this figure stand out to me.

This figure is sold out of the vast majority of stores but is available on secondary markets. You will definitely see more of Storm Collectibles Mortal Kombat line on this site in the future! 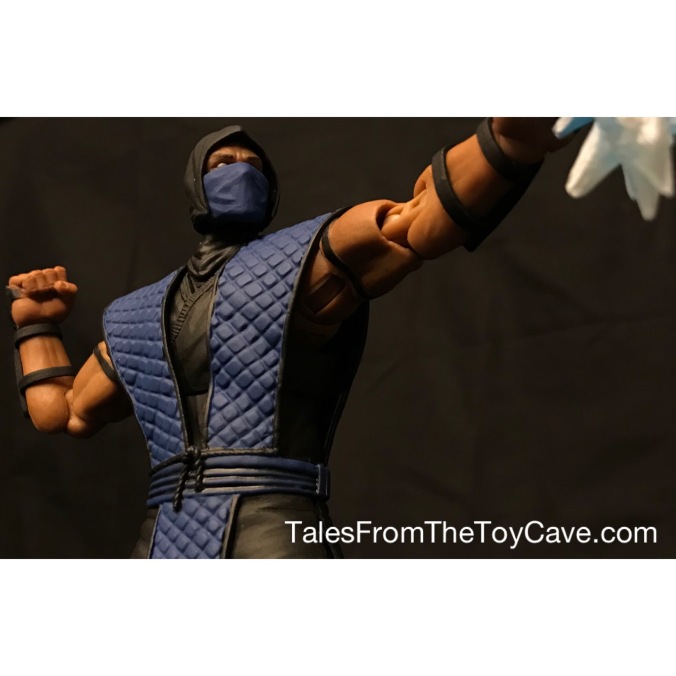 Thanks so much for reading!!!