NECA Toys has been doing phenomenal action figures of Kratos, the protagonist from the Playstation exclusive video game series God of War, for years now. On April 20th, 2018, a new entry in the series tentatively titled simply God of War, a.k.a God of War 4 will be released and NECA Toys is here again with a companion action figure. 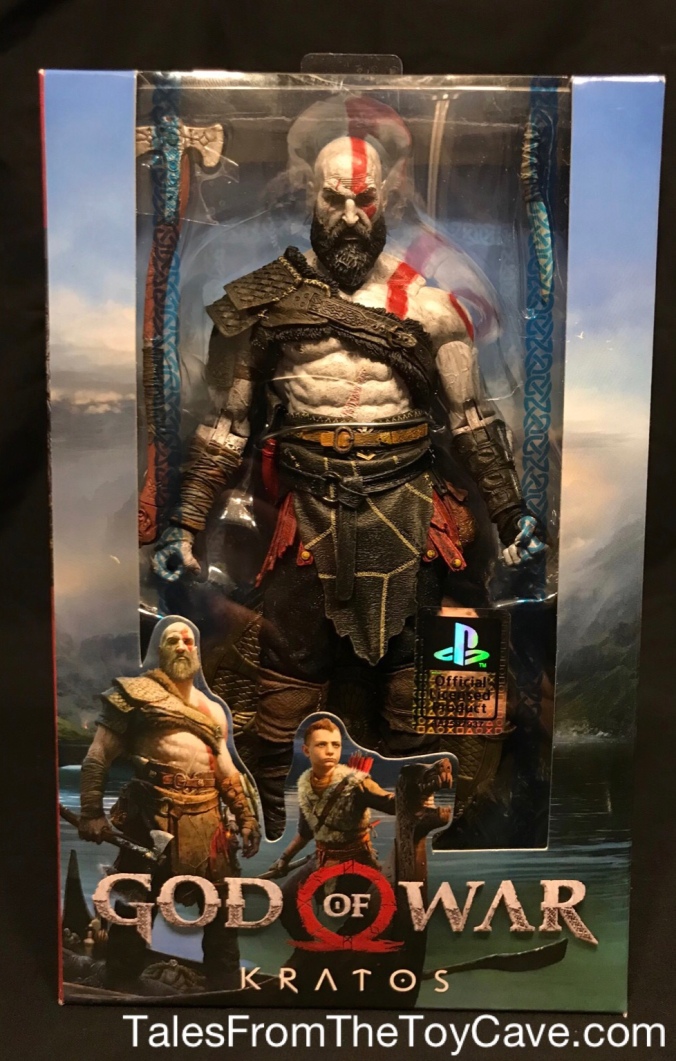 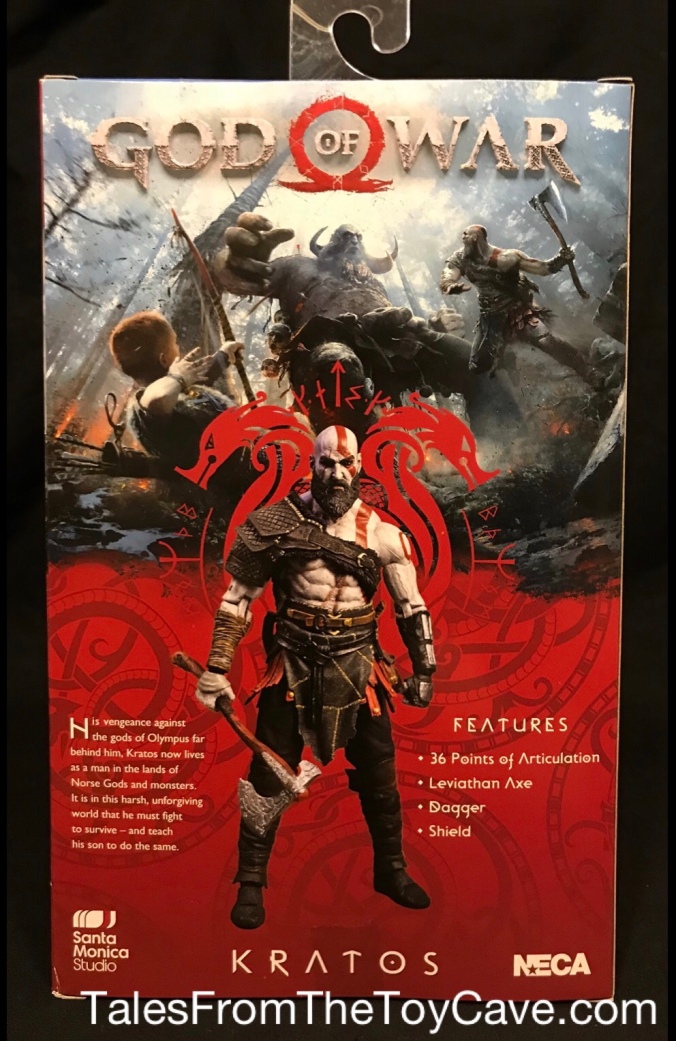 This new entry in the series find Kratos as a much older man than we have seen before and in Nordic attire as opposed to the Greek clothing he has worn previously in the series. He is also a father again. NECA has produced a truly amazing figure for this new incarnation of  Kratos that is an amazing value at $22! The packaging is marked with Nordic style ruins. 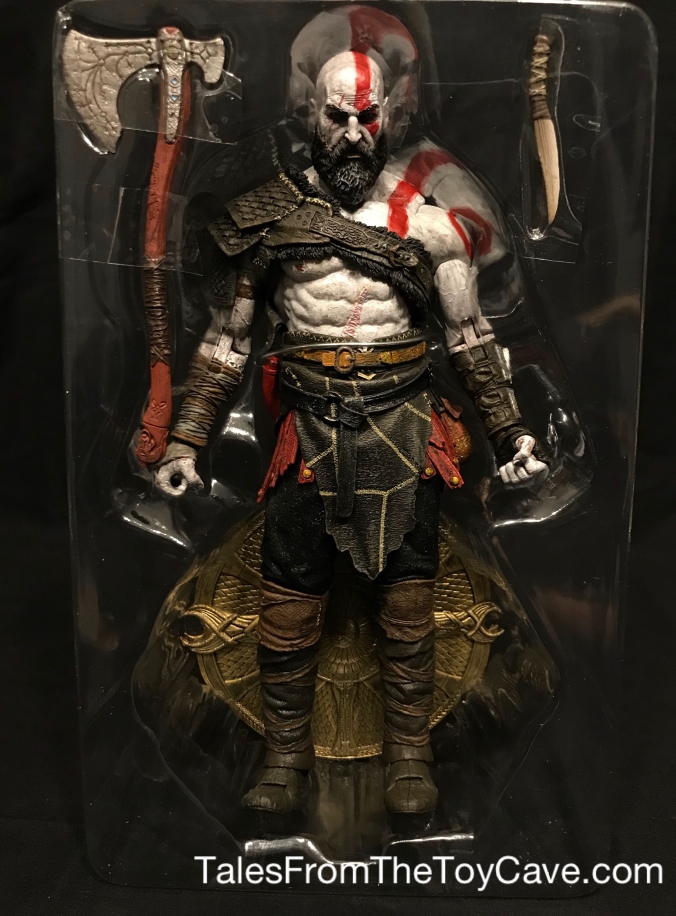 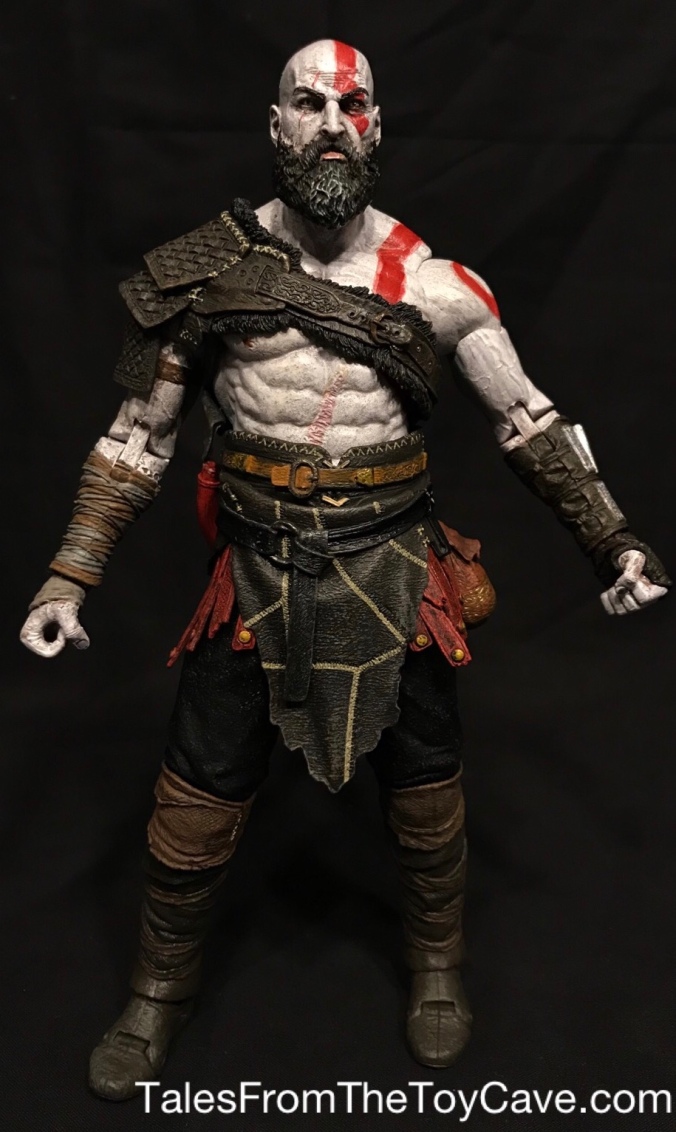 …while a large beard has replaced the once small goatee seen in previous games. 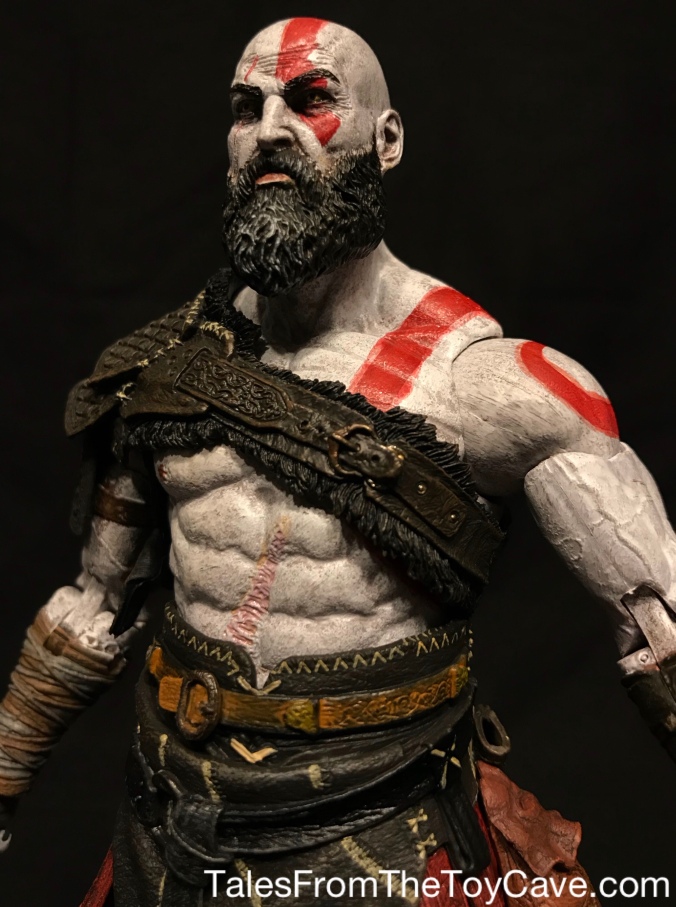 Kratos comes with a battle axe, dagger and shield. He is also heavily articulated with 36 points including double elbow and knee joints.

The axe splits into two pieces in order to slip into Kratos’s fist with more ease. The axe has excellent detail work on the blade with Norse looking ruins, blue stones embedded on it and lines in the wooden handle. 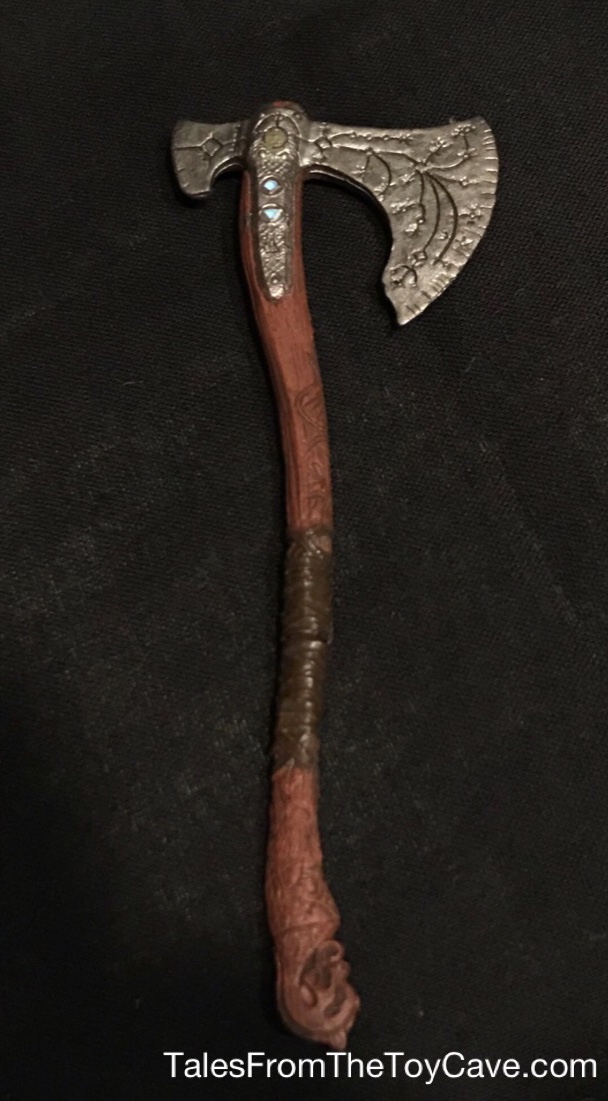 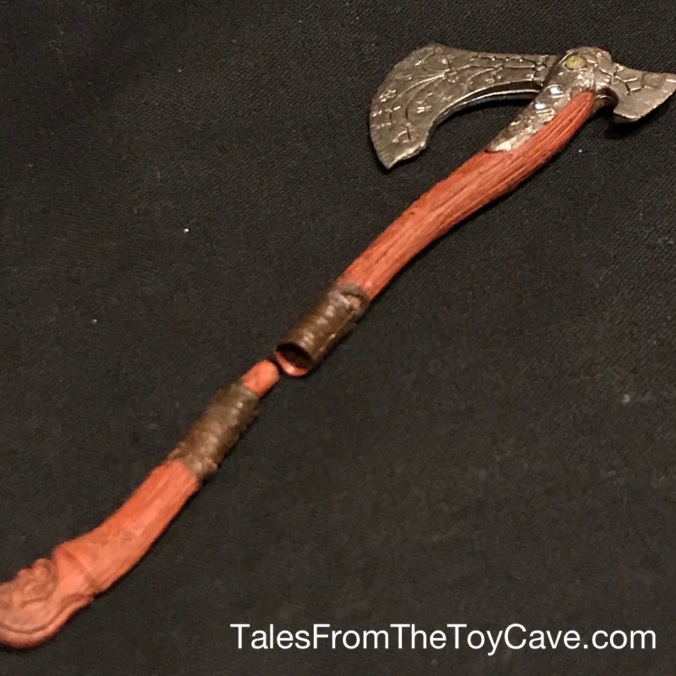 The dagger seems to be made of bone and has wrapping on the handle.

It can also be placed into a sheath on the back of Kratos’s belt.

The largest accessory he comes with is a golden shield that is adorned with red on the back. 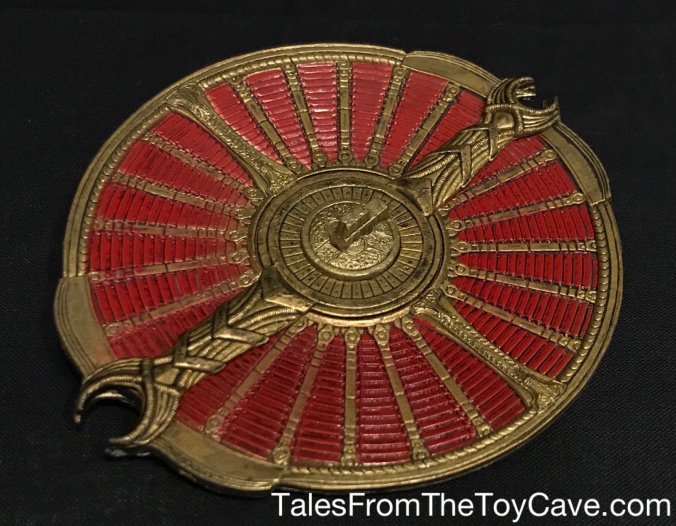 Most times with a shield accessory, it attaches to the figure’s forearm with a C clamp of thin plastic. In this case, NECA made a piece of Kratos’s left arm gauntlet removable… 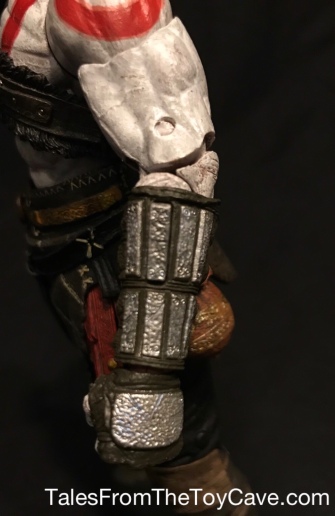 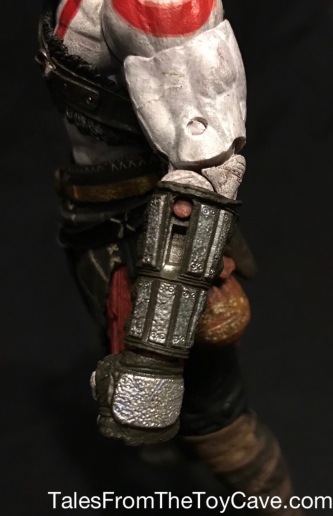 and the shield can just tab into it! 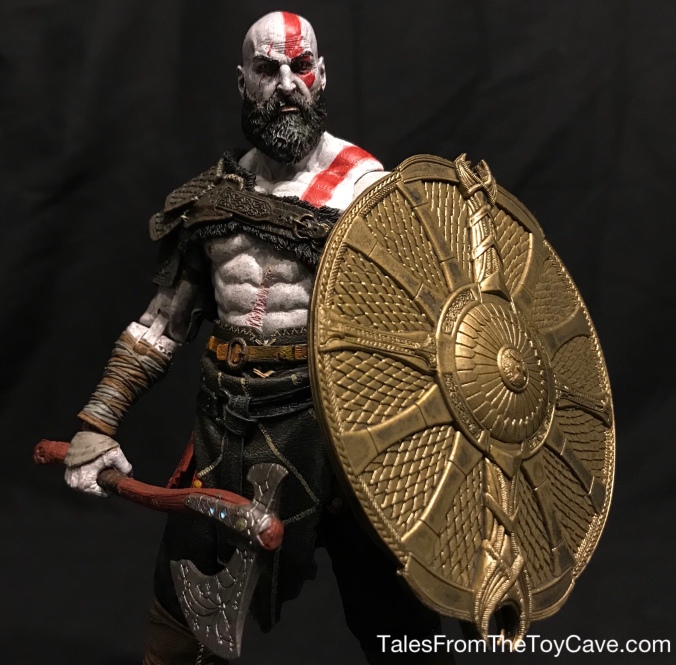 There is also a circular hook on the right shoulder that you can store the ax in. 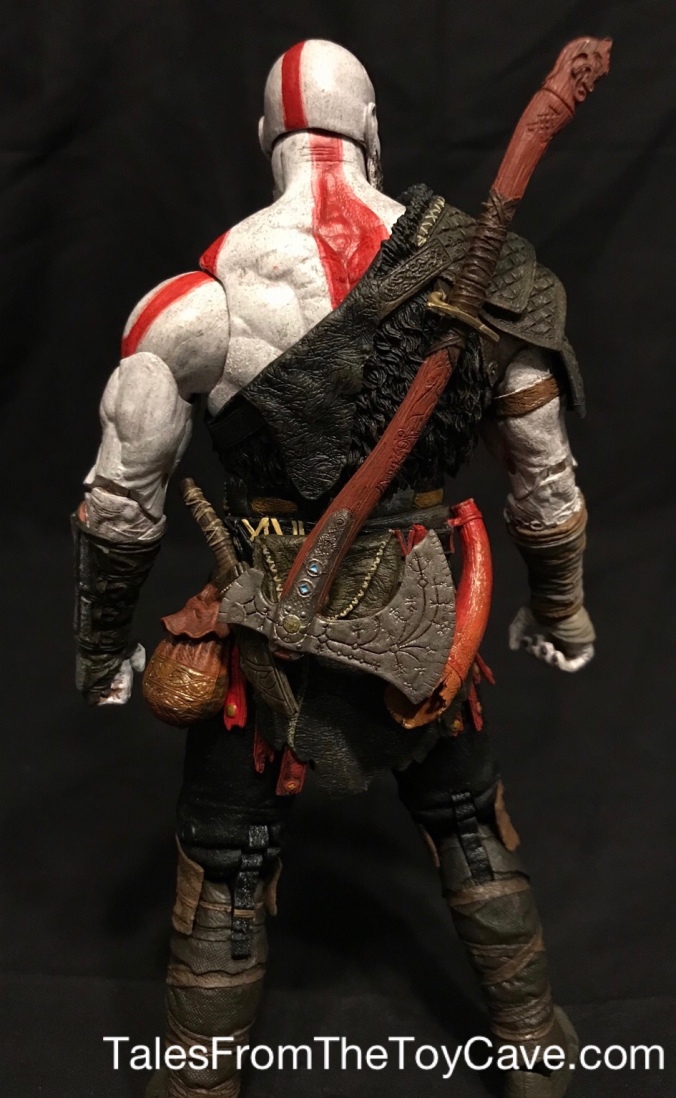 The overall detail level is spectacular on every part of this figure!

The belt is covered in various objects, each one with excellent texture work. 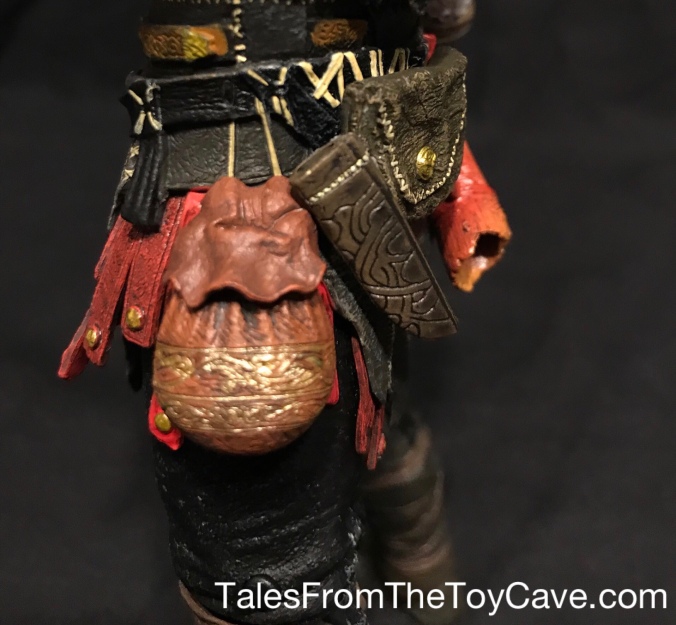 A Viking type horn with lines in the wood it was carved from visible. 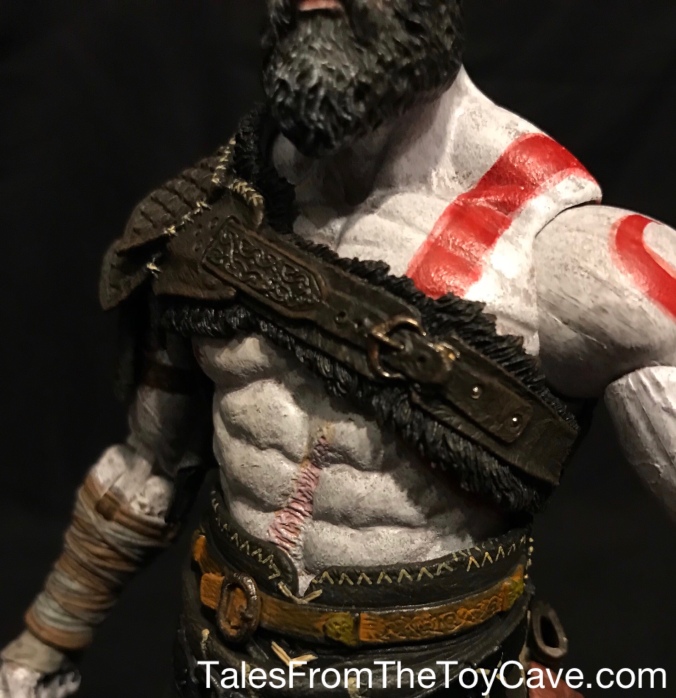 There are also wrappings around Kratos’s legs to protect him from the cold. 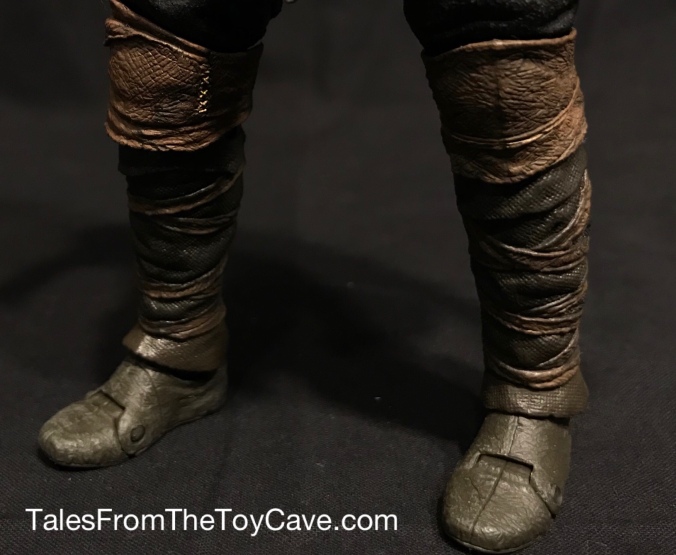 This figure has a great range of poses to choose from, each highlighting the fierce weapons! 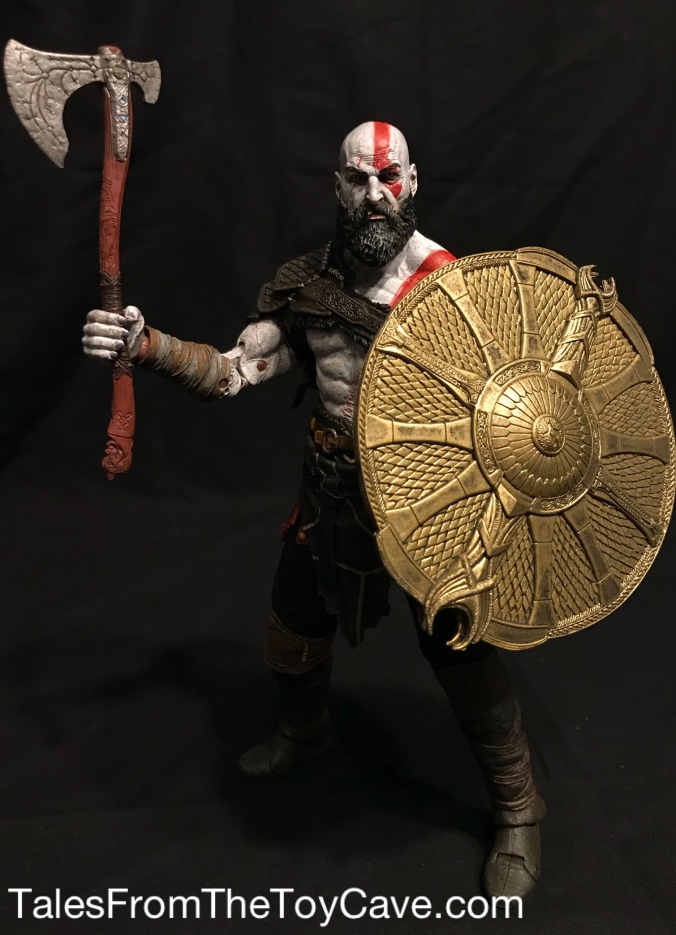 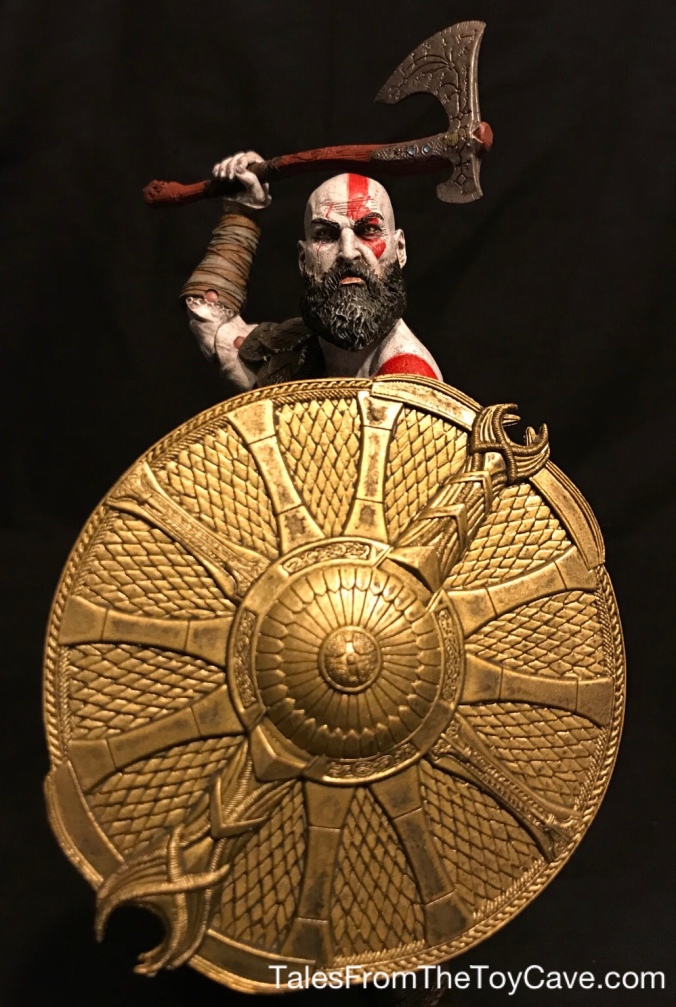 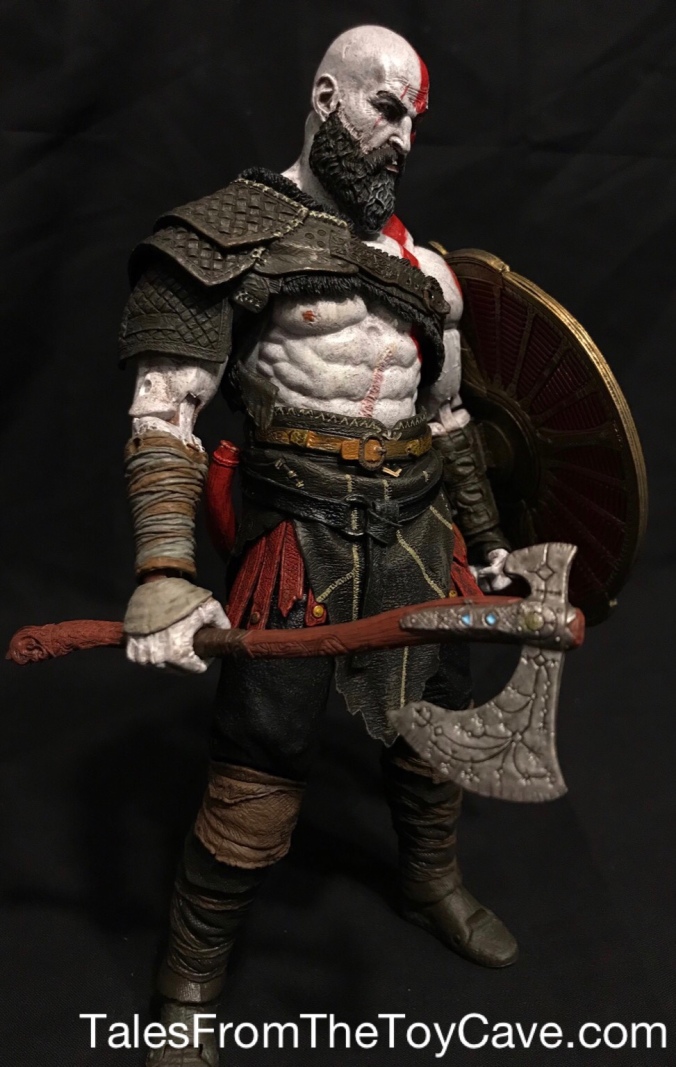 This Kratos is a fitting addition to the line NECA has created, especially after the equally impressive God of War 3 Ultimate Kratos, the previous release of the character which you can read my review of here.

Basically, he is detailed. Very detailed and with excellent paint applications. I absolutely love it and in a generally uncommon move, the figure is available before the game is. Picking one up is the perfect way to get hyped up for the game!

“God of War 4” Kratos is available now in NECA’s eBay and Amazon stores now and will be available at retailers in a few weeks.