“That ain’t no way for no soldier to die” – Mac from Predator
Earlier this year, I reviewed the Aliens Creature Pack by NECA Toys which you can read here. 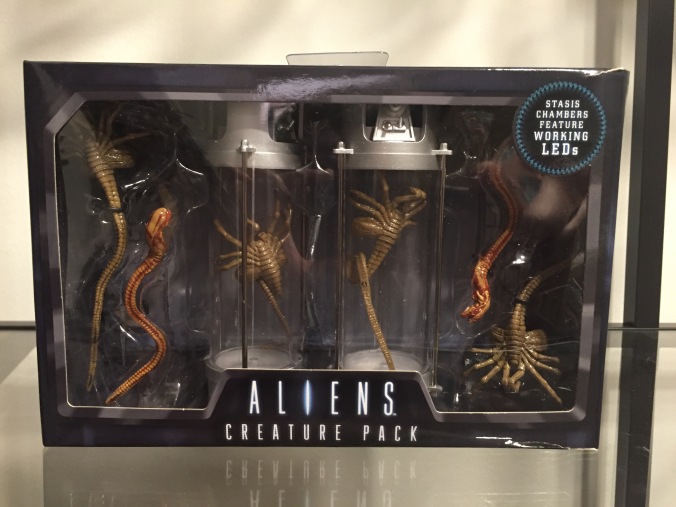 It was an immediate hit with fans and it was announced shortly after that accessory packs for both Predator and Alien 3 would soon follow. Well, the next set has arrived and it’s from the 1987 John McTiernan classic Predator! 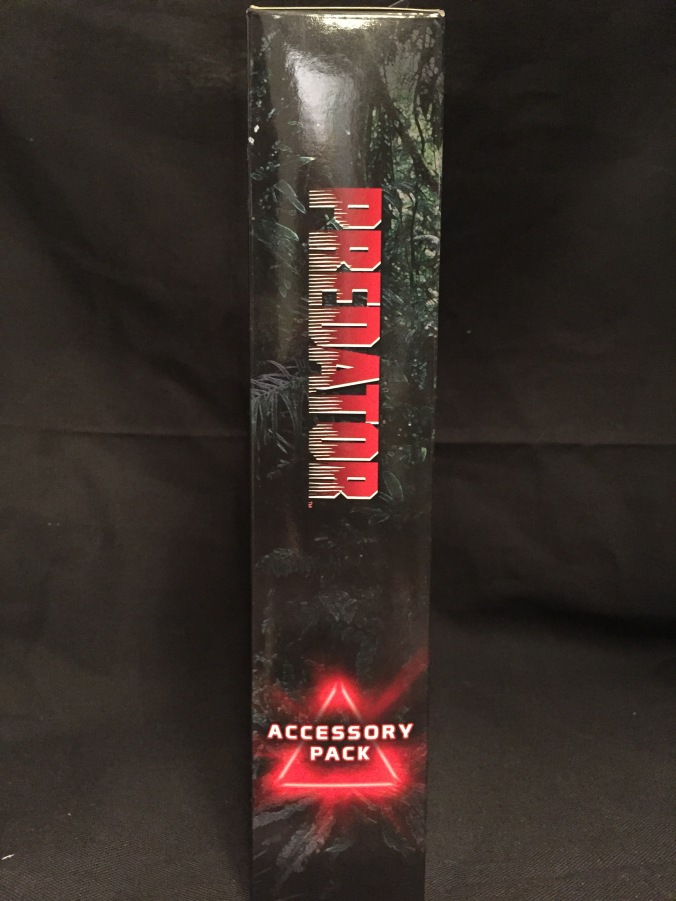 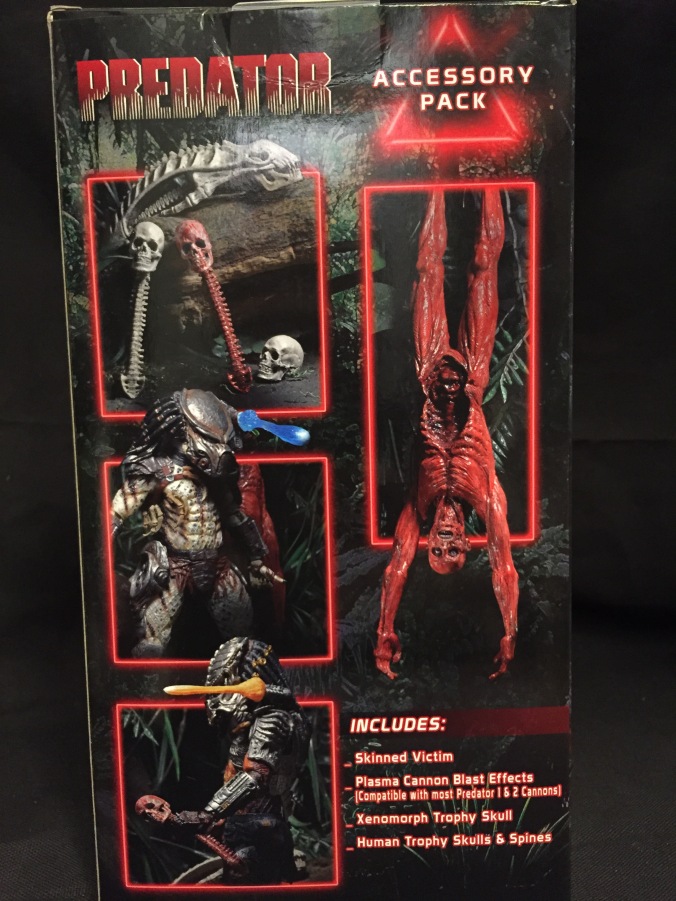 a skull with spine…

a bloody skull with spine… 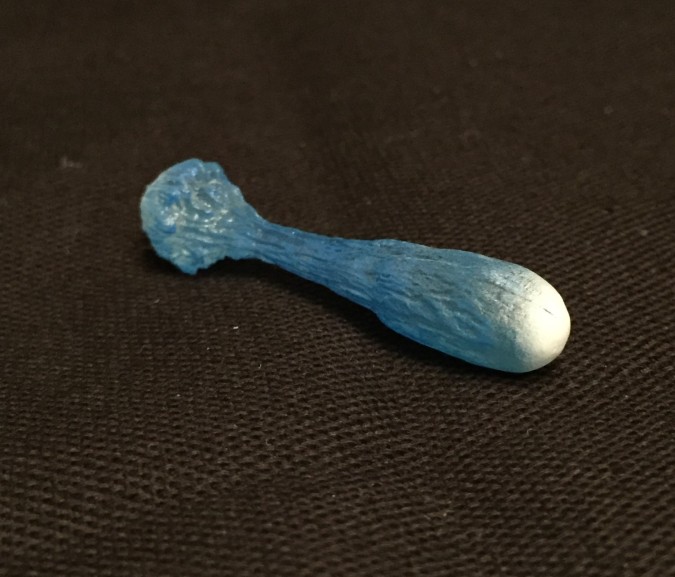 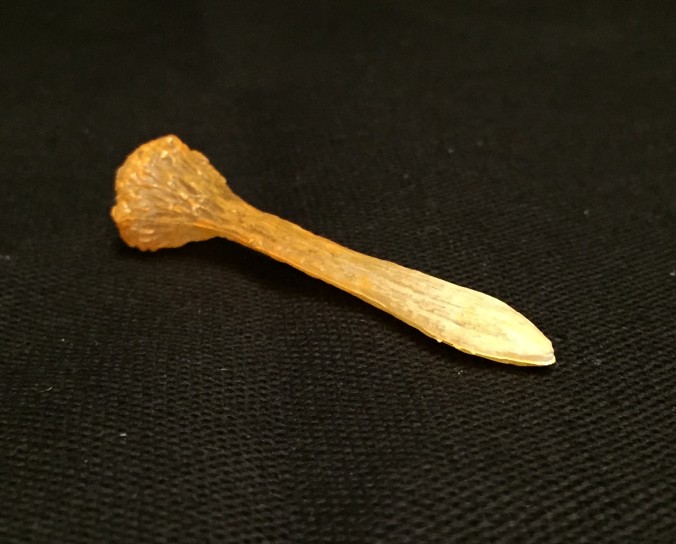 and, the main attraction, a full size, skinless corpse! 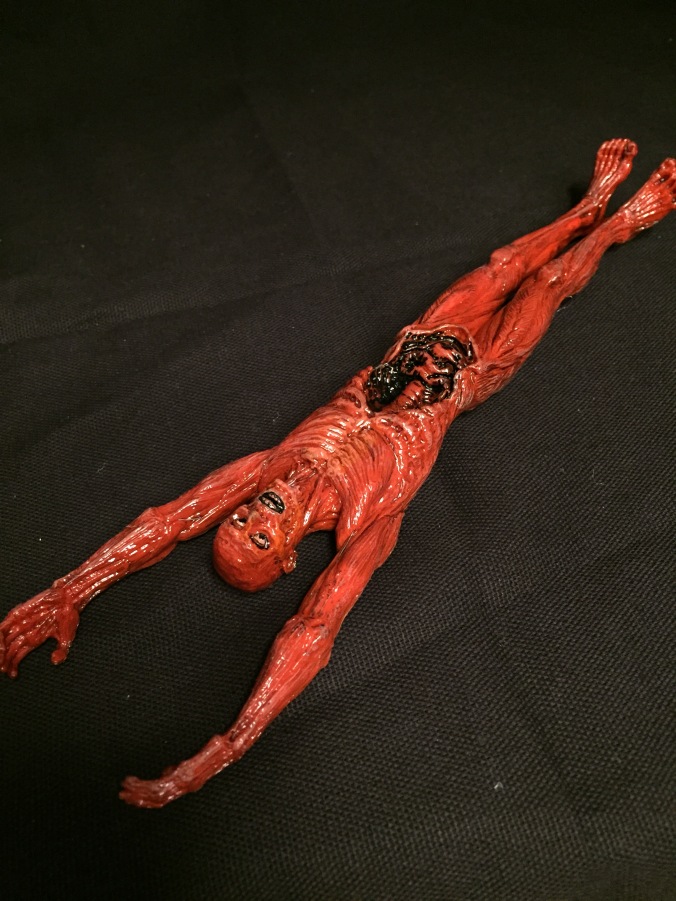 The corpse and blast effects are the new pieces. The Pack comes in a basic window box with a cool infrared shot of a jungle as seen through the Predator’s bio mask as a background insert. 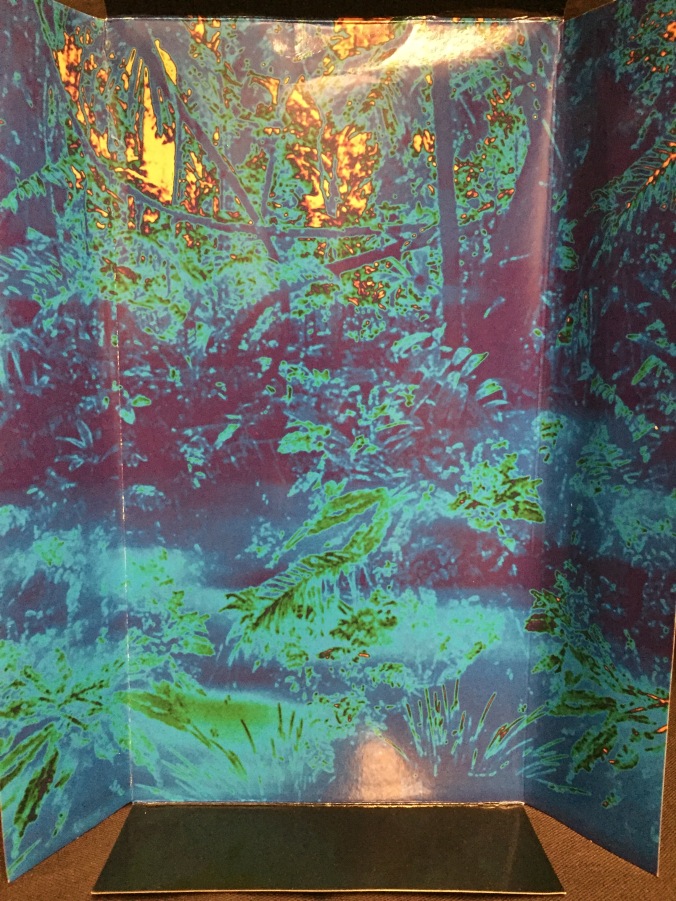 In the film, Major Schaffer and his team get their first sign that something is very different about this rescue mission very early. Billy Sole, the team’s tracker, discovers three completely skinned bodies hanging upside down by their ankles from the branch of a tree while tracking them from a helicopter crash. The men are horrified at what they see and assume that it is the work of particularly brutal guerrilla soldiers. They have no idea what is waiting for them.

The skulls are wonderful set pieces to go with ANY Predator, either being held by them or just at their feet. 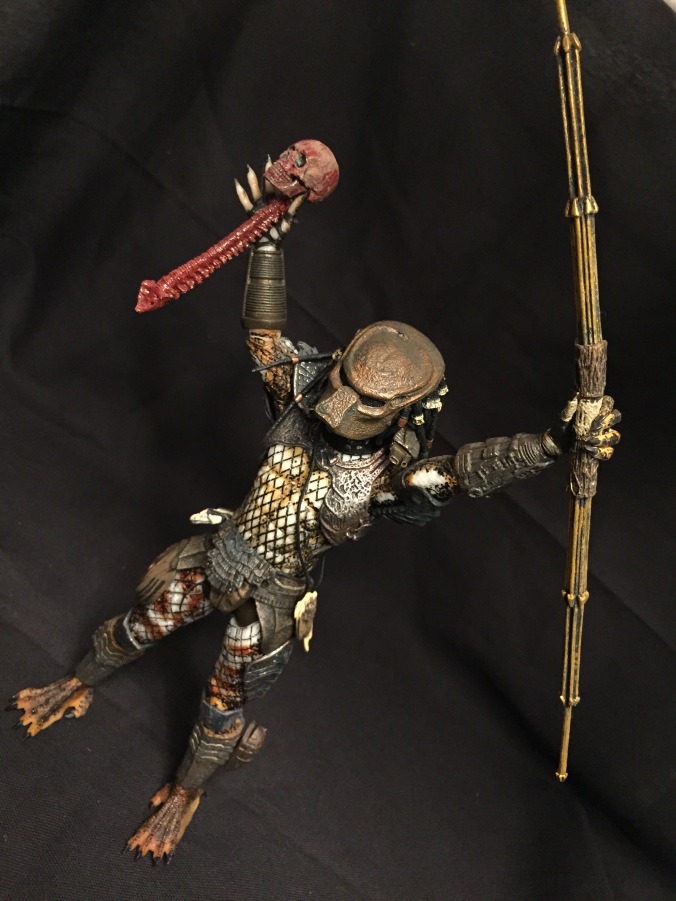 The AVP Predators look especially complete with the Xenomorph skulls!

The blast effects are wonderful little touches that give your displays an extra sense of vibrant motion! 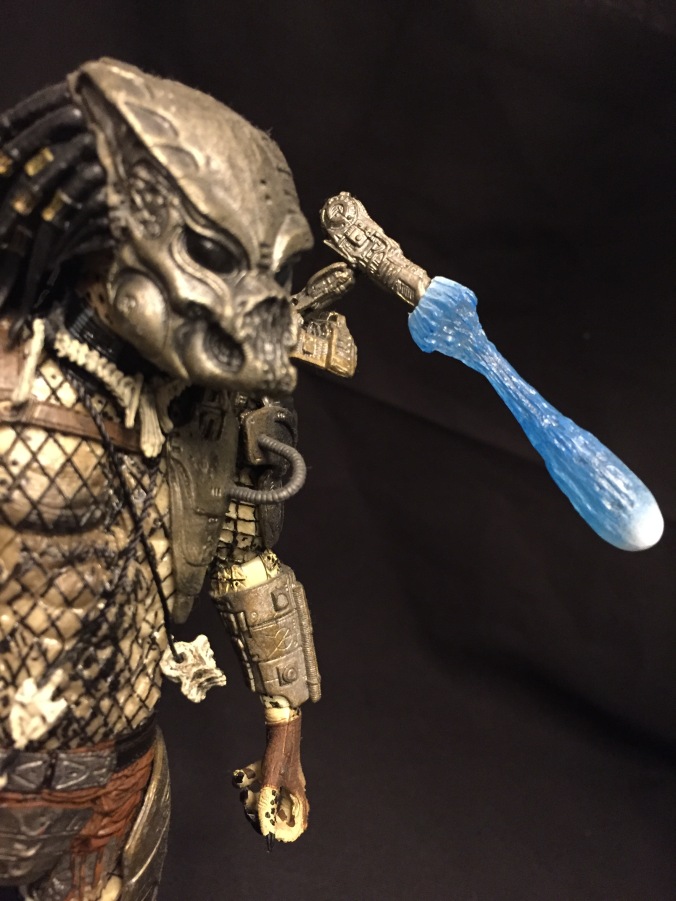 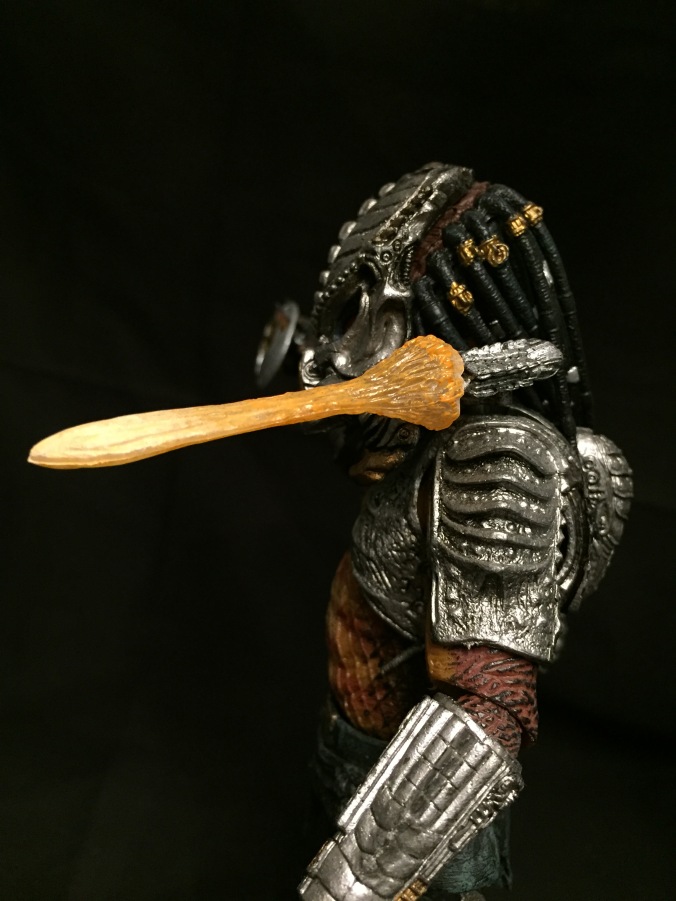 While these blast effects will not fit all Predator Shoulder Cannons, they fit the majority. 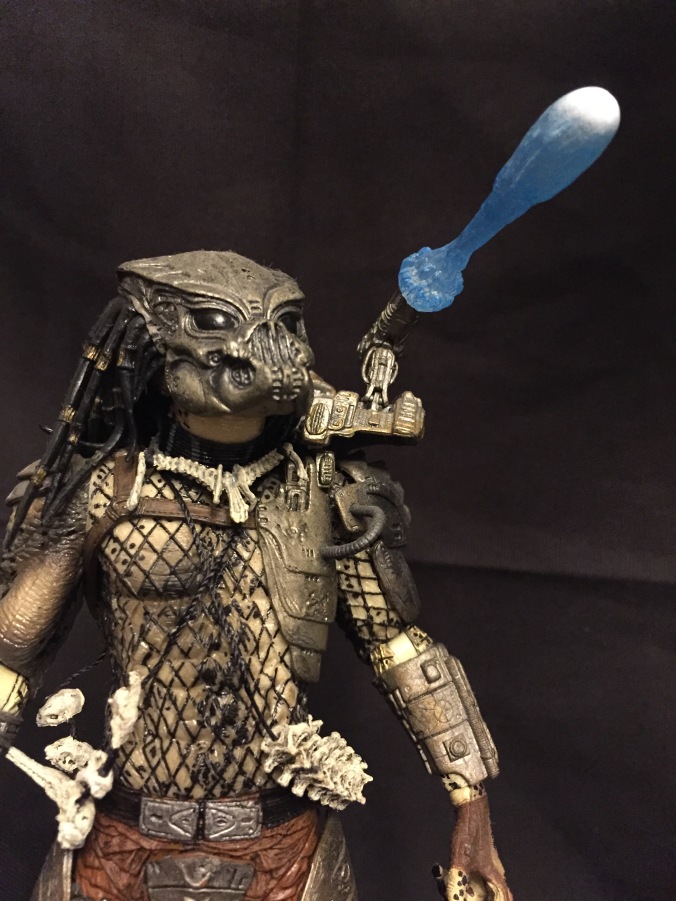 Now, we come to the main attraction, the skinless corpse!

It is made of a hard rubber so it is slightly flexible, definitely not the same type of plastic a normal NECA figure is cast in. Now, in the film, these bodies always hang suspended upside down. The collector is free to come up with lots of different scenes and poses to try and recreate this. I personally chose to use hemp wick to hang the body as it has a natural vine type look. You can find this in smoke shops everywhere or online in many places such as Amazon.

Start by wrapping the hemp wick around the corpse’s ankles three or four times, enough to secure the beginning of the line.

Snake the opposite end of the hemp wick up between the ankles and through the loop the hemp wick has made around them. Pull the rope tight and it should be snug, straight and ready to be hung!

Because these figures are made out of a rubber type material as opposed to plastic, they are much lighter in weight and this makes suspending them from a surface much easier.

It is irrational how excited I was when NECA announced this! Every since the Predator line first started, I was hoping for these to be made as gory set pieces! I can’t recommend this set enough for anyone who is a fan of NECA Predators! 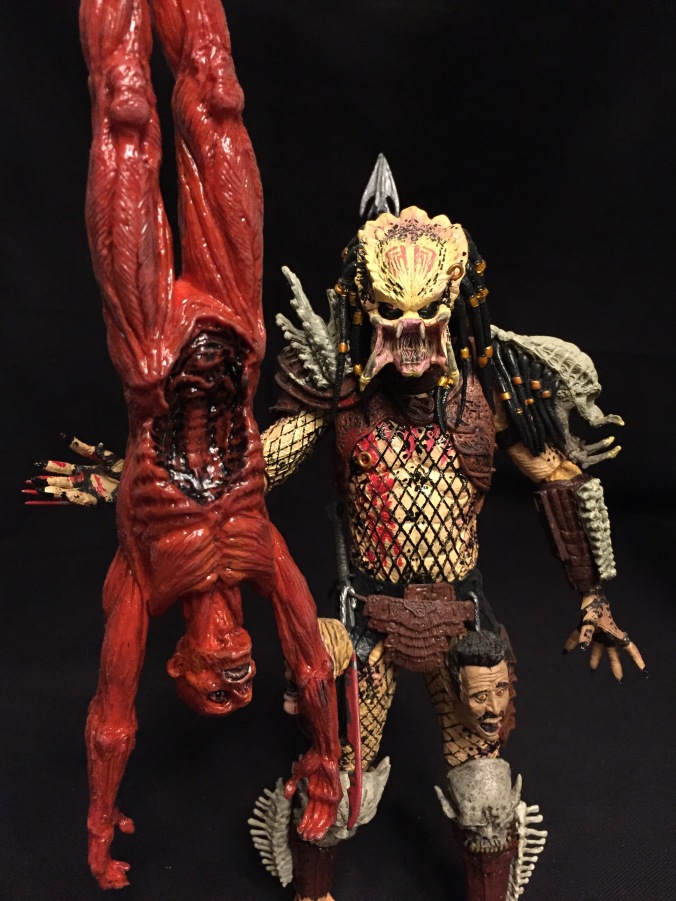 The Predator Accessory Pack is available online and in stores now for around $20.00.

Thanks very much for reading!